Space Fish is a game that I worked on during the first Global Game Jam at the Raleigh-Durham site with Nick Darnell. The theme was ‘As long as we’re together, we’ll never run out of problems’.

It’s sort of a physics-sandbox game, where you can use your StarBeam to grab red or blue stars and fling them around.

Mindy the Space Fish is a persistent omnivore which will exist until the end of time. You are Mindy’s minder, feeding her pesky Red stars and keeping her from eating the pretty Blue stars.

As Mindy’s minder, you are free to ignore her. However, if you want to stick around with Mindy, your life will be full of problems.

The text we included with the game:

This is Mindy the Space Fish.
Mindy likes to eat things.
You are Mindy’s minder.

Care and feeding of the Space Fish:

You’ve got a StarBeam that you can use to grab the nearest star and you can fling it about, either towards Mindy or away into space. We ran out of time to create a real level, so the scene is really crowded and it ended up being more of a physics sandbox than a puzzle, but with a bit more time and actual level design, it would probably be pretty fun.

There is more information, source code, and precompiled binaries available at the global game jam page for Space Fish.

Additional Credits: Patrick Sebring created the title screen, Harrison Moore made the music, and Mike Daly saved us from programmer art by making some sprites in Max and exporting them to spritesheets. 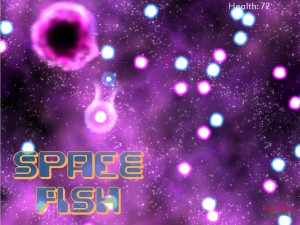