Earlier this week I saw a really neat effect where @Sererena simulated the view-dependent shimmering of a foil card, fed by a smartphone accelerometer.  This seemed like a good challenge to improve my material creation skills in UE4, so I gave it a go yesterday and came up with something I’m reasonably happy with. The view angle is controlled by WASD rather than the accelerometer since I was more focused on the material.

The material has 8 layers:

The foil character accent layer and the star layers all parallax as the view angle changes (shift around, with a larger shift for nearer layers, faking a sense of depth).

The foil layers (everything except the character) are colored by a lookup into a ‘holographic plate’ texture, using an ad hoc function of the tex coord, distance, and tilt amount.

The character accents layer is done with a color notch filter and one star layer, directly added to the character color (rather than lerping to it). This is the part I’m least happy with in the current implementation, but I’d need to test it with a real character to see exactly what I’d want to change.

The material is built using a bunch of material functions as building blocks to make it cleaner, but these aren’t meant to ‘stand alone’; there are lots of assumptions built into them about textures and parameter values.

I’m using a live capture of a 3D character instead of a 2D base, but after the capture Blueprint updates the render target, everything else is the same either way. The capture BP is an opaque box containing the character, a capture component, and a controlled light source.  Even with setting the capture component to only capture the self actor and setting an aggressive culling distance, some ‘global’ things like atmospheric fog still render into it, so I had to use the mode that gave me depth in alpha rather than an opacity mask in order to discard it.

The outline is done with a Sobel edge detection filter on the thresholded depth from the character render target (which has depth as alpha). Rather than using a kernel of the adjacent texels, it uses texels 8 away to increase the width of the outline. If I were using 2D characters I’d probably skip the runtime Sobel filter and do that offline once into a mask texture.

Playing around a little bit with a stylized rendering idea for a 2D platformer that popped into my head (looks better in motion). 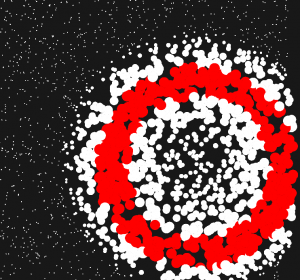 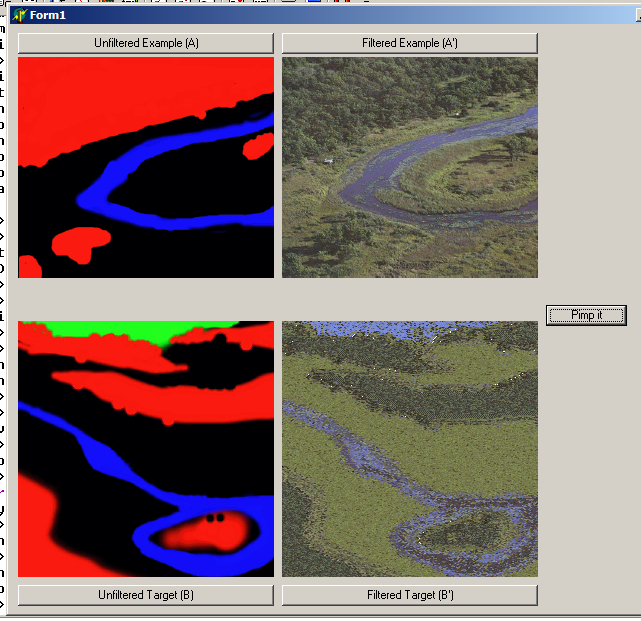 This is pretty much just a laundry-list of features with some pretty pictures. 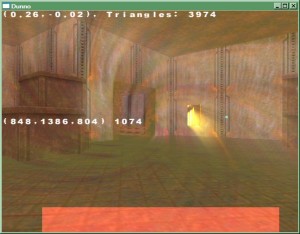 These are all generated using a general purpose parameterized-surface generator with different parameter matricies.

Here are a few images from my real-time raytracer (taken on a 900 MHz Athlon):

It supports temporal supersampling, where only a fraction of the pixels are rendered in any given frame, so the image is rendered at interactive rates with degraded quality when being moved, but it converges to an optimal solution if the camera is left alone for a second or so (not enabled on these pictures).

I intend to add adaptive sub-sampling to increase speed without much loss in quality, and as an extension, the level of subdivision can be increased when the camera is still. This should give the speed advantages of sub-sampling without the problems in static images (missing small objects), although it will still have aliasing in animation if an object projects to something smaller than the initial grid resolution and falls fully inside of a grid cell.

It currently only supports spheres and planes, another area for expansion.

Note: The scene files are from an computer graphics course I saw online a long time ago, but I don’t remember exactly where they came from. If anyone has contact information, please let me know and I’ll add it here. 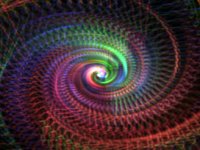 END_OF_DOCUMENT_TOKEN_TO_BE_REPLACED

Here are a few screen shots from a software rasterizer and TNL stack for the GBA. 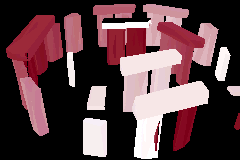 The second screen-shot also shows the use of Mappy VM for profiling code using the console.