Finished Robotender Mk3 just in time for my halloween party (with literally minutes to spare). This one is a pretty radical departure from the previous designs, using a robotic arm instead of pressurized dispensing. I managed to pick up a Scorbot ER-III arm and controller off of eBay. They were originally used for teaching robotics and motion planning at universities, and are generally pretty used-and-abused (two motors were almost falling out of their mounts on this one), but it runs quite nicely after everything was cleaned and tightened up. 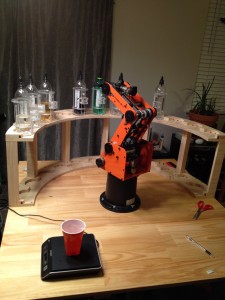 It’s a little slow compared to the Mk1, but it’s a lot of fun to watch, can hold more bottles, and is easier to maintain. It uses custom bottle carriers that hold 710 mL soda bottles, and can hold up to 24 such bottles. There is a digital scale hooked up to the computer as well, which gets zeroed once a bottle reaches the pour site, letting it determine how much liquid has been poured much more accurately than the simple time-based approach used in Mk1.

I took a number of pictures during construction on this one, so I may do a build log post later.