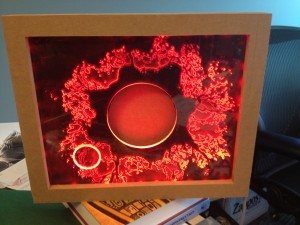 I pulled an all-nighter and designed/fabricated a LED edge lighting box plus etched plate in advance of the Gears 3 launch. The original plan was to slide an unused junk android tablet in and show some numbers from the stats dashboard in that central window, but I wasn’t able to get the tablet on the secure network at work, so now it’s just a pretty light box sitting on my desk. I almost slid my iPad in, but the slot I machined for the tablet is about 0.5 in too short for an iPad, though it had 0.75 in of slack for the target tablet.

The light gently pulsates / undulates around the border (driven by an Arduino), aiming to look a bit like the corrupted omen on the title screen.

The LED strip I used are LPD8806 driven strips from Adafruit, and they are a dream to use compared to the older Christmas light strand style strips I’ve used in the past. Each LED is individually addressable via a SPI-like interface to set a 21 bpp RGB color, and they have their own internal PWM clock, so you can fire and forget, no need to keep clocking them.

Also, Gears of War 3 is out, you should play it!